This is a reblog from bestgamerever.co.uk:

We sit down with Josh Holmes from 343 Industries and ask him to answer some questions from the Halo community.

Halo 5: Guardians is less than a month away, and in spite of the approaching launch, Josh Holmes has taken some time out of his schedule to answer some questions from our community of Halo fanatics. Originally we had quite a lot more submitted, but I’ve narrowed it down to the best ones, as well as culling the ones that we know may not have an answer available until much closer to launch. He’s a busy man after all, and we don’t want to waste his time.

Without further ado, let’s see what Josh has to say:

BGE: We’ve seen Team Slayer and CTF get some love in Arena – will other Halo  gametypes make their way to a hardcore setting? Double Team or Assault for example? 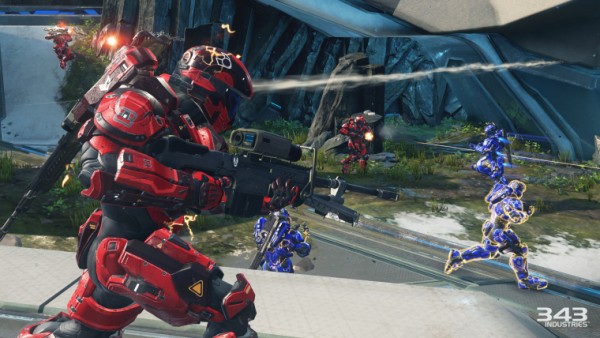 Josh: We’ll be announcing launch playlists over the next couple of weeks. Our goal is to keep playlists focused on a core set of activities and then rotate additional experiences through a Weekend Social playlist, using input from the community to help guide what shows up there.

BGE: Halo is many things to many people, as I’m sure you’re aware – How do you cater for all tastes at launch via playlist management? Will the arguably niche, but still hugely popular gametypes like Grifball, SWAT and Infection be there at launch?

Josh: You’re absolutely right – Halo has a massively diverse fan base, which is both a tremendous strength and a challenge when it comes to curating experiences. It simply isn’t possible to cater to all tastes within our core playlists. That’s what custom games are for, and we’re excited to be hosting all customs on dedicated servers for Halo 5. This means that players can set up their own experiences, leveraging a wide range of available game types and custom game options, and have the same excellent online experience we provide in matchmaking. In addition to our core matchmaking playlists, we will have a rotation of additional game types featured within the new Weekend Social playlist each week.

BGE: The general consensus online, and certainly from footage we’ve seen is that Halo 5 Arena will feature AR/Pistol starts. The pistol was pretty beastly in the beta back in January – is this the reason the BR isn’t there as a spawning weapon? What were the drawbacks of starting with a BR and why did the team decide on AR/Pistol starts?

Josh: For Halo 5: Guardians we’ve tried to create the best, most balanced Halo sandbox in franchise history. Working closely with the 343 Pro Team, a team of former professional Halo players, we have meticulously tuned the weapons within each power tier to be equally viable in different situations. By providing weapons that have unique roles and placing them at set locations around the map, we want to encourage map movement and have players use a range of different weapons during any given Arena match. The pistol has been tuned to be an effective utility weapon and a good partner to the AR as part of the starting loadout. It was very strong in beta and we’ve made a number of changes to improve its killing potential, though it requires a high level of gun skill to fully realize that potential. The AR is a versatile automatic that is solid in many different situations but can be beaten both situationally (facing precision weapons at range) and through skilled use of the pistol (and other precision weapons). The BR remains a great weapon and is featured on the majority of maps as a pickup. Players also have the option of modifying starting weapons within custom games, to suit their individual preferences.

BGE: Are we able to choose our region for the dedicated server used in matchmaking/custom games? Or at least a preferred region?

Josh: Our services detect location and assign players to the nearest and best datacentre to ensure optimal experience. We considered allowing players to limit themselves to a specific datacentre but this introduces a number of issues with matchmaking, particularly in an experience where matching for appropriate skill is so important. We have been running closed beta tests consistently over the months since beta to optimize our matchmaking and QoS (Quality of Service) detection and we are very happy with how it performs today. (From experience, it’s working really well – Sik) 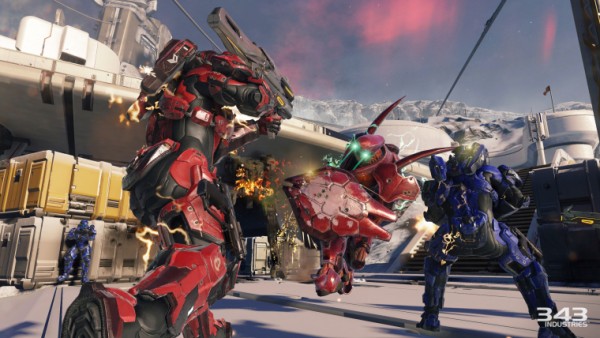 BGE: We’ve known for some time now that BTB will not be available at launch, but rather in the weeks (not months) that follow – will the maps used be ripped and adjusted from Warzone, or will there be new BTB maps that will be force downloaded in an update?

Josh: Big Team Battle will feature maps that have been specifically crafted to support the experience.

BGE: Will all Arena playlists have visible rankings? If not, will BTB (when added) at least have ranks? It’s not like we have to worry about Guest accounts anymore…

Josh: All Arena playlists will feature CSR rankings, including Big Team Battle when it launches.

BGE: The new REQ system has a lot of things to unlock – could you give us a rough figure of how many unlocks there will be for cosmetic items such as armour and weapon skins at launch?

Josh: Hundreds of options. We will have over 400 different REQ items just within the armor, helmets and visor options that are available at launch. That’s without including many other cosmetic options like assassination animations, stances, emblems, skins and more. We’ll be continuing to add new items after launch as well.

BGE: Will the original Mark V Helmet be available via REQ packs? Recent footage revealed it was not available as an unlockable – is it there via other means? If not, will it perhaps come as additional content after launch?

Josh: Both the Mark IV and Mark V helmets will be available through the REQ system.

HFFL: YES! I hope the armor sets will be too (I’d assume so).

BGE: The Xbox Elite controller suspiciously launches on the same day as Halo 5, and Frankie has alluded there may be some Halo 5 bits available for it – can you shed any light on it’s development?

Josh: The Xbox Elite controller is truly the best competitive controller ever created. We’ve had a close relationship with the team building this controller and our 343 Pro Team has been on the front lines testing and giving feedback throughout its development.

BGE: Forge. We appreciate it’s unlikely you’ll be able to tell us much, as a bigger reveal will be coming as we approach launch via bigger publications than ourselves, but there are many Forge fans waiting nervously in the wings. What can we expect from Forge this time around? Mirror functions for making symmetrical maps? Terrain editing? Multiple texture skins for various pieces? Please tease us with some vague non-information and words here:

Josh: We’ll be talking about Forge in more detail in the next couple of weeks. When released this will be the biggest evolution in Forge since its inception and we’re excited to see what community members will be able to create by taking advantage of the new tools. Stay tuned.

HFFL: Man, I can not wait to hear/read/see the news about this! Forge for me is an important part of my Halo gameplay. I really enjoy creating maps, even if I never use them for customs. It’s just fun to build! (Think Minecraft Halo style!!)

BGE: Remix maps – we’ve seen them in the beta in January – do all Arena maps get remixes?

Josh: We have remixes planned for most if not all of our Arena maps. The majority of our remixes are akin to Regret – they are significantly different in terms of both art content and play experience. We’re committed to delivering the most map content of any Halo game, both at launch and beyond.

BGE: Is there any concern for fans new to the series to be overwhelmed with Halo lore? I’m happy to see Blue Team, but new players may wonder who they are, and why they should care – how do 343 alleviate that issue to ease players new to the series in gently?

Josh: One of the great strengths for Halo is the depth of our universe and lore. We want fans of the lore to feel rewarded for their knowledge, but it can’t be a requisite for understanding and enjoying the games. The campaign for Halo 5 has been designed to be enjoyable as a self-contained story. We have additional details from the extended universe available to players who wish to explore and consume all of the supporting narrative, but those shouldn’t be necessary to understand the central storyline for the game. At the same time, there can be an assumption made that just because a character or place has been explored in the novels or comics, all of that extended story needs to be surfaced in the game in order to make sense. That’s not necessarily the case. There is an economy to storytelling and we strive to provide the necessary amount of information without weighing things down. Comparing this game to Halo 4, I think we’ve done a better job in this regard but ultimately that will be up to players to decide.

BGE: And finally, of all the things added to the sandbox for Halo 5, from the new movement set and weapons like the Plasma Caster, what is your personal favourite?

Josh: I love thrusters. I loved the thruster pack AA in Halo 4 and with thruster now part of the core abilities available to all Spartans in Halo 5, it’s awesome. As a player there are so many creative ways you can use the thrusters ability, whether offensively, defensively, or just as an augmentation to core mobility as you navigate the map. It’s to the point where I can’t play another game (Halo or any FPS) without immediately missing the ability. It’s become second nature to me.